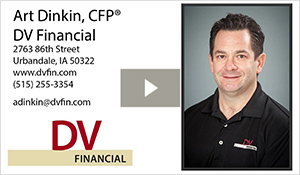 In 1989 Art started his career in financial services as an agent for Mutual of Omaha in Shelton, Connecticut. He quickly climbed the corporate ladder and during his ten year tenure he served as a District Manager, an Advanced Markets Consultant, and General Manager Unassigned in the company’s home office in Omaha, Nebraska. In 1999 he accepted a transfer to Des Moines and shortly thereafter decided to change career tracks from management to building his own practice. After leaving Mutual of Omaha, Art associated with New York Life and later Central Financial Group before launching DV Financial in 2009. Art is an experienced speaker and teacher. After several years of teaching industry courses to professionals for career enhancement and continuing education, he was offered a part time faculty position teaching business courses for Des Moines Area Community College where taught Introduction to Investments, Personal Finance, Introduction to Management, Small Business Management, and Introduction to Business for 10 years.

Art holds a full complement of insurance licenses and securities registrations. He earned his Life Underwriter Training Council Fellow (LUTCF) designation in 1992, Charter Life Underwriter (CLU) in 1994, Chartered Financial Consultant (ChFC) in 1999, and Certified Financial Planner TM in 2002. He is a past president of the Des Moines Association of Insurance and Financial Advisors and was awarded the Gene Hilton award for outstanding service to the organization in 2007.

Art and his wife, Christina, live in Clive with their son and two daughters. Before the kids took up competitive swimming, Art used to be a pilot for the Des Moines Skydivers and enjoyed long distance running. Now he is often found at swim meets where he is an active swimming official or enthusiastically cheering for his kids. 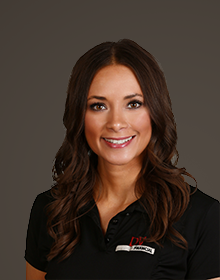 LeKisha came to DV Financial in March of 2019 to provide administrative support.  After spending time in similar roles with different companies, she was ready for a new start.  “Working for DV Financial is very rewarding.  My role has many challenges and it allows me to expand my knowledge of the industry.”

“At DV Financial, we are passionate in our work, committed to our clients, and will not compromise in our standard of excellence.  I am proud to be a part of such a fine organization.”

LeKisha and her husband live in Ankeny with their daughter, cat and dog.  She volunteers her time as a Girl Scout Leader and in her daughter’s classroom as a Homeroom Parent.  In the limited spare time that she has, she likes to cook, and spend time with family and friends.